The spring expedition to Manaslu was a wonderful experience, although the result (7,700 m) was frankly disappointing. Such a strong team…
Katja was already thinking of a renewed attempt at this ‘mountain of the soul’ during the return trek from Manaslu to Kathmandu. It was soon to be realized. Three months later, September 2008, Katja and Henk were back again. This time, just the two of them. It was the next step in their development: climbing an 8,000m+ peak without other companions or climbing Sherpas. Only the cook, Lobsang, accompanied the two in base camp – giving a delightful sense of familiarity. This great cook had also joined them at their previous expedition to Manaslu.

Katja: “It was unbelievable how Manaslu had changed in 3 months. It seemed like a completely different mountain. On arrival (8th September) there was no snow at base camp, the glacier on the way to Camp 1 was icy and full of crevasses. One part was so impassable we had to climb over the rocks above the glacier. Above Camp 1 too, the serac zone was full of crevasses. Luckily for us, another expedition had brought ladders with them. Up to Camp 3 (6,700 m) we found the route more difficult than in the spring. Beyond that, conditions were actually more favourable: hard snow instead of the rock-hard ice as we had previously encountered. Although it still took considerable patience to get this high up the mountain.

After the first successful climbing rotation, the fun was over. After that came days of continuous snow – four metres of snow fell in just 10 days!  We had never seen anything like it before. We went up twice, purely for the purpose of saving our tent in Camp 1. Twice we dug the tent out and moved it to the new, higher level of snow.

It wasn’t until September 28th that conditions were such that together with other teams we could go higher again. The goal was to get as high as possible, and even make an attempt to reach the top. Up until then we had only slept at 5,750 m (in Camp 1); not exactly the ideal acclimatisation for a summit attempt. But we wanted to go for it. See where the ship might run aground.

We kept going in one push: two nights at 6,400 m (Camp 2), one night at 6,700 m (Camp 3), and then on to 7,450 m, our fourth camp, taking up our small tent every time. It wasn’t without difficulty. There were great doubts about the avalanche risk just above Camp 3. A Swiss team (Kobler) called off the climb. Various other teams decided to wait for a day. After much to-ing and fro-ing, we decided to follow the Himex team, which was the first of the season to go towards 7,450 m, following behind their tough Sherpas.

We left the next day (3rd October) with a small group heading for the peak. Henk and I kept up well with the other team for the first few hours, then they – using extra oxygen – went ahead of us. Their sirdar asked if they could borrow 70 m of rope from us, they would then fix it. We agreed, emphasizing they would attach it to the narrow crest just below to the top, and not before. This would mean a win-win: they can continue, and we can use our rope after fixing.

By my reckoning there is still a long way to go when I see the climbers of the other team hugging each other on top of a small rock outcropping. I don’t understand: that isn’t the summit I remember from photographs I have seen of it. Ten minutes later on arrival, it indeed seems to be the highest point. But if you go a little to the left, you see that the mountain continues: the real summit is about 50 metres further on and 25 metres higher. We are completely confused. This can’t be the top. And worst of all, perhaps, is that our rope is gone. The other team attached it under the fore summit, directly below the point where we are now standing. They are in a hurry – their oxygen is running out – and therefore not at all intent on completing the climb. They want to begin the descent.

How to describe our amazement when we discovered that the climbers with whom we shared the fore summit at 8,140 metres had claimed to have reached the peak? We were speechless. But in the end, it was an eye-opener. This is what happens – not only on climbing expeditions… True peak performance and the satisfaction and inspiration of making your way towards it: that is what really counts.
Meanwhile it has all had time to sink in and to accept the situation. Sometimes, 100% is just not attainable, and you have to be content with 99%. And we learned new lessons about what could be different or better the next time. Anyway, Manaslu is a fabulous mountain, and it is a gift to climb her!

N.B. On 4th and 5th October 2008 the weather stayed quite good and the teams who waited made their summit attempt: some climbers reached the true summit, or just below (below the belaying point of the rocky summit), and some others reached the fore summit. For Mrs Hawley it appeared the first time she did hear about the existence of a fore peak on Manaslu. How about the 200 climbers before 2008 who reached the ‘summit’? 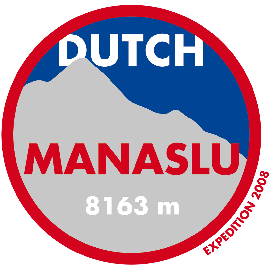 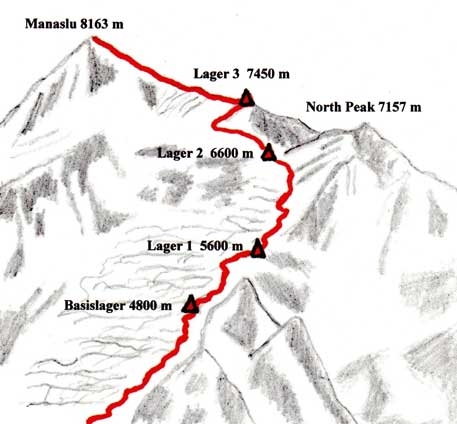