Katja: “This adventure had two objectives: on the one hand visiting projects in which my husband Henk and I are involved, on the other hand making a shortcut from the Annapurna area via Mustang to Upper Dolpo. And this via two high and challenging mountain passes, which are hardly ever crossed: Teri La and Ghemi La. ”

Through the Foundation Topaspiraties, we supported the Shree Palchok School in the Helambu area (just NE of Kathmandu) with a new building after it was destroyed in the April 2015 earthquake. In December 2015 we were at the grand opening. In 2017, we were able to help with the installation of solar collectors (for hot shower water) and the construction of a kitchen for the new hostel.

We started this 2018 journey with a visit to the school, located in the village of Kakani at an altitude of over 2000 meters. Now we could see the results and progress with our own eyes! Once again there was a festive event, heartwarming. Also we visited 3 families in the area. A large number of donations made it possible to finance the construction of their new house. More about this and about the volunteer work of the Topaspiraties Foundation: stichtingtopaspiraties.nl

After the meetings and visits of the projects, we continued the journey on foot through Helambu and walked in a beautiful lust via Tarkeghyang, Tharepati and Chisopani back to Kathmandu. We know this area like the back of our hand, but it was mainly an emotional reunion. On April 25, 2015 at 11:56 am, Nepal was hit by a dramatic 7.8 earthquake on Richter. At that time Henk and I were at 2,100 meters between the villages of Kutumsang and Chisopani, about 75 km east from the epicenter. We were lucky, but many were not: some 9,000 people were killed in this earthquake. For more on this, see this web page.

After the visit to Helambu we left together with our Nepalese friends Chhiree Sherpa and Lal Bahadur (LB) by jeep towards the Annapurna area for our new adventure. Our first day trip went to Meta, off the beaten track, to continue from there to the remote village of Naar (4000 m). The altitude was immediately felt here, despite our acclimatization beforehand. The crossing via Teri La took four long days, with the terrain after the pass in particular being one big wilderness and discovery tour.

The Ghemi La is located to the west of the village of Ghemi, and is also locally referred to as Ser La. Actually we would have liked to take this pass in the opposite direction during our Great Himalaya Trail (spring 2011), but crossing it is strictly prohibited at this time of year. According to local custom, crossing the mountain pass would displease the gods, and that would inevitably lead to crop failure. Therefore it can only be done in summer and autumn.
That this rarely or never happens, was evident in the village of Ghemi. Nobody seemed to be able to tell us anything about the approach route, which we had heard is very difficult. Trekking through the wilderness in Nepal is completely different from trekking on beaten Himalayan paths or rough terrain in the Alps. We did experience that during our GHT;)
It is therefore a big advantage if you follow advices from the local population. In the end, we managed to find someone who had done the route once years ago and who could help us get started. And that was a good thing; what an adventure!
The big challenge is mainly in the first part above the village of Ghemi, up to about 5000 meters. Then you enter an overwhelmingly open and barren mountain landscape. For the final crossing to the pass we went up too early on the hill face and ended up in a car-sized block area. Quite a challenge to traverse, so in retrospect we would have been better off continuing on the valley floor and then blasting straight up on a vague path that turned out to exist. We camped at over 5000 meters behind the pass along the Nakhkhem Khola River, and the next day had to find a connection to the more often trekked route, towards the village of Chharka Bhot (4300 m). Major landslides after the fierce monsoon blocked our route, but it worked!

Then we continued over Mola La (5030 m) to Shimen, the same beautiful route we took on our Great Himalaya Trail. Actually, the plan was to take the Muri La from Shimen, north to Musigaon. And then via Nisalgaon and the shepherd’s route along Karang to Kuwagaon. From the Reling La (4600 m) on this shepherd’s route, we saw the village below in 2011. You cannot go further north, and for years it has been my dream to go here again. Unfortunately, it was not there this time: the bridges that were destroyed prevented the route from being taken.

That is why we went to Seldang, to walk from there a route that was new to us: via Sela La (5100 m) and Nagdalo La (5350 m) we returned to civilization. And then you pass the famous azure blue Phoksundo lake (3600 m). What a privilege to have visited this lake in reality and having been able to conclude this majestic journey with this natural miracle! 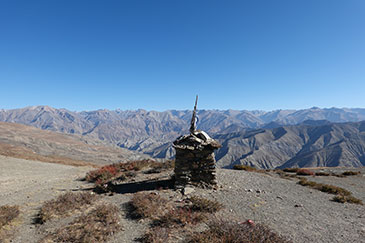 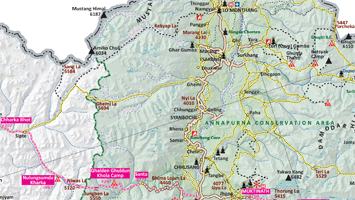