Summary: we trekked through Helambu in december 2015/january 2016 by the route Sermathang/Tarkeghyang. From Tharepati we followed the normal trail via Gosainkund. What is the current status of Helambu that was badly hit by the Earthquake in spring 2015? It is possible to do a trekking here via the lodges! The path was almost everywhere in a perfect condition. But in the villages there is significant damage and the number of sleeping places is in some villages limited. 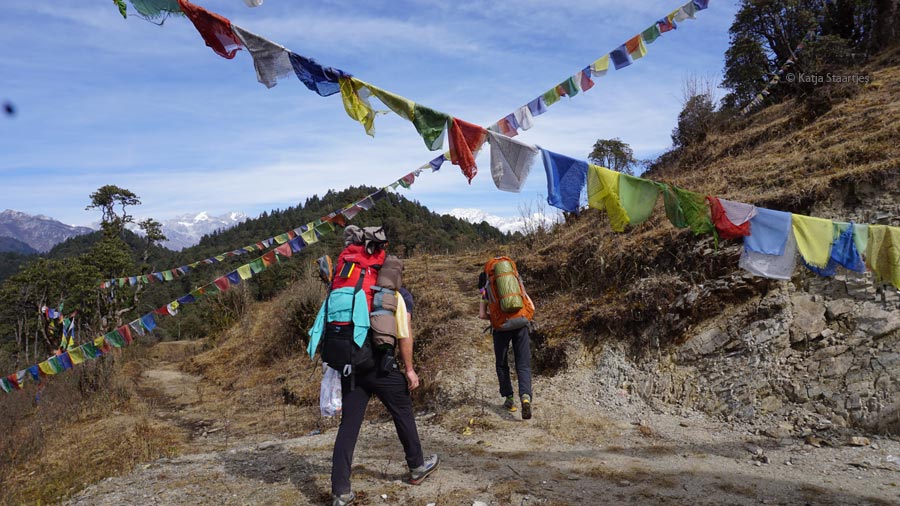 Report. In the evening of 29 december 2015 our group (Henk Wesselius, Pieter & David Hemels, Roy Heiner and me) arrived in Kathmandu. The next day we departed per jeep to Sindhupalchowk/Helambu. We didn’t follow the trail via Sundarijal. Henk and me did trek it several times, including last time, when we witnessed the unfaithful event of the earthquake of april 25 2015. Now instead we went into Helambu on the east side via Melamchi Pull. More than 1000 meter higher lies the village of Kakani with the main goal of our visit; the local Shree Palchok Secondary School. Here we attended at 30 december the impressive opening ceremony of the new school building together with our friend Chhiree Sherpa, who helped us in the last 6 months to coordinate the project with the School Management.
After this ceremony we had the plan to do a trekking over the 4600 metres high Laurebina La pass (Gosainkund). For Pieter and David this would be their first mountain trekking and an introduction with Nepal. So Chhiree Sherpa did join us too on our trek. What were the condition of the lodges in Helambu, was not clear before we departed. That’s why, to be on the safe side we carried tents, cooking materialsand some meals with us. That also provided work for Ngima Dorji Sherpa who joined our group as a porter. This made us a seven members team, when we were waived goodbye at the end of the morning of december 31 by the students in Kakani. 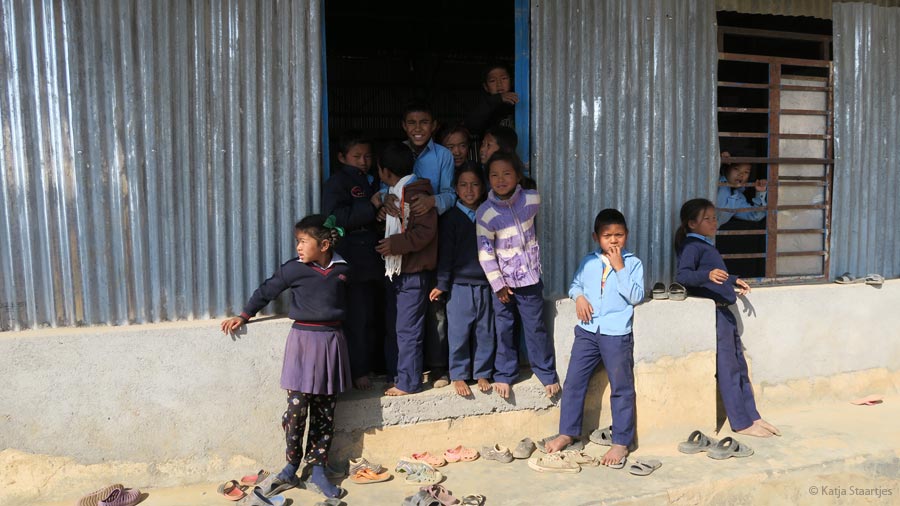 With very sunny weather we started our trek. The first day is full with monasteries and stupas. In the morning we visited the destroyed monastry of Kakani and in the afternoon we passed by several stupas, some still proudly standing but most turned into rubbles. Every time you see a damaged stupa you feel deeply touched, it’s a terrible sight. Just before Sermathang lies the monastry Palri Radma Odsal Ling. Which was also partly damaged but reconstruction is in full fledge. We also met the initiator, a Nepalese who lives in America: “ We worked ten years on this monastery, but I am thankful that not all was destroyed and that we are able to rebuild this sacred site.”
Admiring how people can keep on thinking positively. 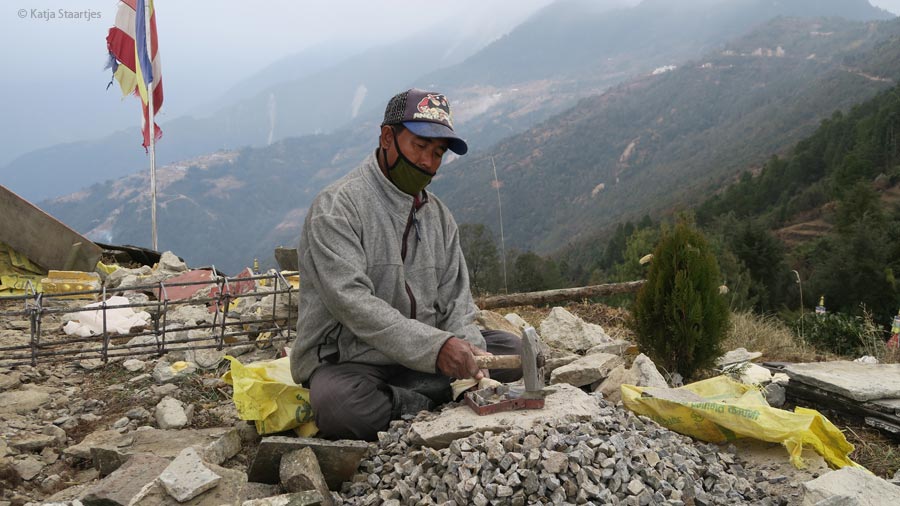 With some rain drops we arrived after a few hours walking in Sermathang, with 2600 metres altitude a good place to sleep and to acclimatise to the height. We were curious how the village would look, because in Kakani there was only one house standing. But because the rubble was cleaned quite well in Kakani, it didn’t look that bad.
In Sermathang we got a small shock, a lot of houses were still in rubbles. We slept in Dorje Guest House, a sturdy concrete building that was actually the only building that didn’t got severely damaged and the only lodge in this village. That night another group with guests arrived in the lodge. They appeared to be civil servants from the Ministry of Education. We started talking and enthusiastically told them about our beautiful experience with the opening ceremony of the school in Kakani. Our story didn’t land very well; “How is it possible we don’t know anything about this school?” was the grumpy reply…
The next day up to Tarkeghyang, you can follow the usual route (over the road) or you can follow the high trail over Yangri Danda. We opted for the last option: a beautiful trail through the forest and over the ridge, with a lovely view over the mountain giant Dorje Lakpa en the Jugal-massif. At 3200 metres there is a nice kharka (open field) where we made soup and had lunch just before the clouds arose.
The village Tarkeghyang is probably even more devastated than Sermathang. There is practically nothing left standing. Only a few people are left living here in temporary accommodations, a real difficult and sad moment to watch this whole situation. Also the lodge Hotel Tarkeghyang was completely destroyed, but is currently reopened. The owner constructed a new wooden building with a sink plate roof and 3 rooms. What a perfect place! Spacious and very clean. And sitting and eating dal bhat near the heat of the fire in the kitchen with the family. The owner is full with strength and optimistic and that made us happy too!

In Melamchigaon the situation is like in Sermathang. The Eco-friendly lodge had a kitchen, and a small room with 2 beds, a true homestay. In Melamchigaon it was usefull we had our tents with us, part of the group slept under the orange sheet. From Melamchi it’s a steep trail up to Tharepati, a beautiful route through the forest, where we rejoined the normalHelambu route. The Sumchho Top Lodge was the only lodge that was rebuild and open; it is a lodge where, just as years ago, you share a sleeping space with 7 beds. Good memory and nothing wrong with that, even very intimate! Here we met our first western people on the trek; 2 Australian women. The following days we passed the still beautiful Gosainkund, where we met another handful of people. NepalNOW should and has to be spread loud and clearly !!
The situation north of Tharepati is better than the circumstances south of Tharepati. There is less destruction and there are more sleeping spots. In Cholangpati and Sing Gompa it’s almost like nothing has happened.

Conclusion: when you are not with a big group, trekking in Helambu is still possible without tents and sleeping in lodges. Even though the limited facilities we experienced a warm welcome everywhere. It’s fantastic to experience this kind of hospitality in Nepal again, and even more intense than before. We enjoyed the beautiful surroundings and nature intensely. The hike and great weather enhanced our experience and of course the company to share the Nepal Experience with our friends. Nepal we love you! 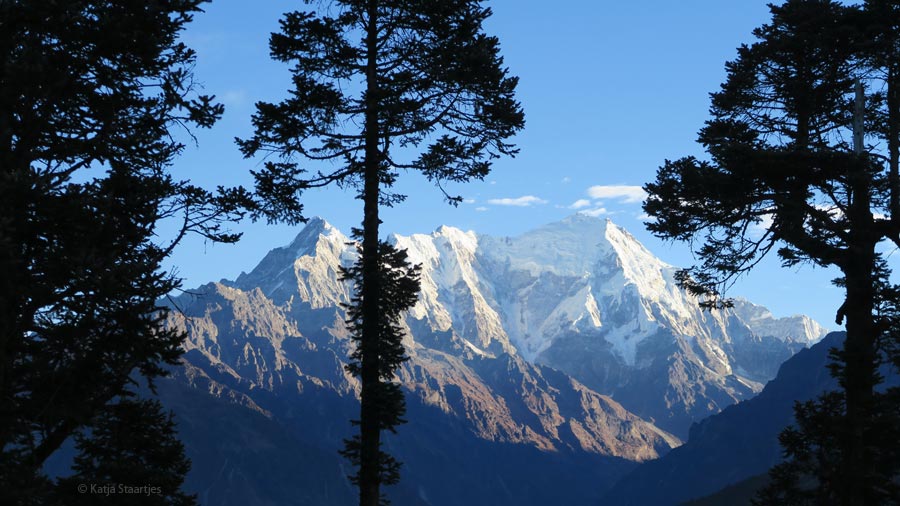 Gopte (3450 m): lodge is reconstructed but was in january 2016 closed. It will reopen in the spring season.

Ayethang (4150 m): reconstruction of the only lodge is going on and it will open soon!

Gosainkund (4350 m): all lodges reconstructed. When we passed 1 lodge was open, the rest of the places will reopen in the spring season.

Chalangpati (3600 m): hardly any damage and both lodges are open.

Chandanbari / Sing Gompa (3400 m): best village we have seen: all lodges are running full service. Cheese factory, with some damage, is open too. The Gompa was being reconstructed while we passed.

Thulo Syabru (2200 m): some lodges are open. Big damage and most people do live in temporary houses in the fields below the village. If you do want to continue to the Langtang valley, you can not pass by Bamboo (the normal lower route). You first need to descend to the bridge of Syabrubensi (1450 m), and then climb up to the village of Khanjgim (2300 m) at the other side of the valley. For the description of the situation in Langtang see the blog).

N.B. Personally, my husband Henk and me, we were in Helambu (Thotungdanda, between Chipling and Kutumsang) at 25 april 2015 during the quake. From others I heard that the lodges in in Mulkharka, Kutumsang and Mangengoth are reopened. Do check in advance how is the situation for Chisopani and Chipling. The village Pati Bhanjyang was totally devastated when we passed there just after the quake.

Back to Langtang Call Now Button Scroll to top