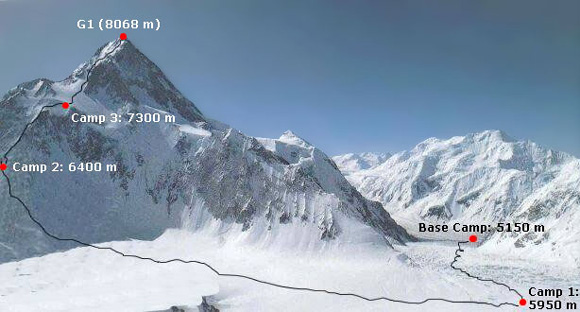 Gasherbrum 1 (G1) is also known as Hidden Peak, because it is only at the very last moment that you can see the peak. It is located in Pakistan in the Karakoram mountain range close to K2, and can be reached in a three day drive from Islamabad, with an 8-day trek over the famous Baltoro Glacier. The mountain is very challenging to climb and has a small, pointed peak. Its biggest technical challenges are at around 7,000 metres (a 70-degree couloir, the ‘Japanese couloir’) and a steep traverse (60 degrees) just below the summit.

The G1-expedition was the first independent expedition to an 8000+ mountain for Katja Staartjes and Henk Wesselius. The Dutch mountaineering couple were working together with the Pakistani climbers Amin Ullah Baig and Jhan Baig (from Shimshal, Hunza valley). In the base camp they had the support of the cook, Allam, and there was liason officer Imran.

Katja: “We arrived 13th june in base camp and in the beginning we had excellent weather. However, it lasted only until 22nd June. The rest of the climbing season in Pakistan was known for its disappointing weather: unceasing snow relieved only by high level storms for days on end, interspersed with only a day or two of good weather. Several expeditions returned home without having achieved their goals.

The patience and persistence paid off at last. On 25th July, we climbed up from camp 3 without fixed ropes, and with our team of four we stood at the top of G1 in glorious weather. This was possible thanks to the excellent teamwork with two very strong teams: the team of Ralf Dujmovits & Gerlinde Kaltenbrunner and the Spanish team with Carlos Pauner, Willie Barbier and Raquel Perez. Total we summited that day with 13 climbers, among 3 couples at the same moment on one eighthousander!

Unfortunately, the fun at the top was quickly overshadowed during the descent when the Spanish climber José Antonio Anton suffered a fatal fall just below the summit. All day the teams had climbed without (fixed) ropes. A terrible end to a beautiful climb, collaboration and experience.” 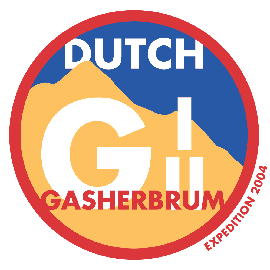 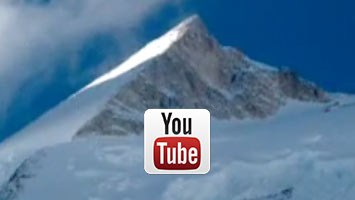 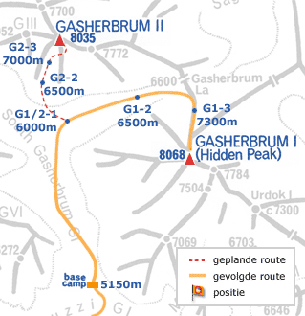