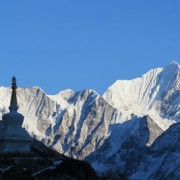 Two weeks ago we saw a glimpse of the Langtang Valley. At 6th january 2016 we were in Thulo Syabru after traversing Gosainkund from Melamchi Pull and Tarkegyang (see Helambu report).
Langtang was most hit by the earthquake in spring 2015 and is the place where our friend Chhembel Tamang and his family live, who me and my husband Henk support since 2003.
With our team we would drive directly back from Syabrubensi to Kathmandu, there was no time to walk into Langtang Valley. The rest of the team flew back and I would stay a few days in Kathmandu to meet friends and people at NTB and ministery and follow up on agreements.
To make a long story short, I rescheduled my flight to find out the status of Langtang myself together with our friend Chhiree Sherpa. We also wanted to visit Chhembel. His wife unfortunately died during the earthquake and his lodge in Kyangjin Gompa has been destroyed.
On 10th january we went by jeep back to Syabrubensi and started our trek into Langtang. From the village of Sherpagaon our friend Chhembel joined us. He could tell all the details of what happened, the current situation and what the plans are for the reconstruction. Here my findings.

Summary: it was heartbreaking to see the devastation and to feel the emotions of the people and victims. If we purely look at the trail I found the situation hopeful, the trails are restored and partly readjusted. Though there have been many landslides; with rainfall and heavy snowfall they are an extra risk.
Enough lodges reopened to make trek with overnights in lodges possible.
It’s absolute rewarding to visit Langtang valley, the area is still beautiful and the locals are so thankful to receive you when you visit.

Start of the Route
It’s impossible to walk by the low route via the Langtang-khola river (Bamboo lodges); too many landslides. The start of the route now can only be done via the high route on the other side of the river by the villages Khangjim en Sherpagaon.

Khangjim (2300 m): not too much damage in this authentic village. There used to be seven lodges open, in january 2016 this was five.

Sherpagaon (2600 m); three lodges open. I didn’t know this trail into Langtang but it’s beautiful route, with wide open views.
After Sherpagaon there are 4 landslides on the way to Rimche, where the trail connects again with the ‘normal’ Langtang trek. 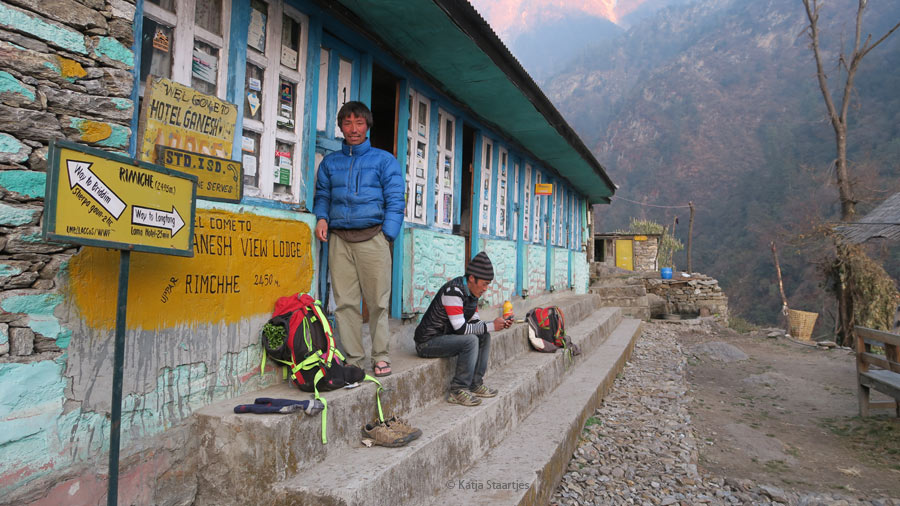 Rimche (2400 m): of the two lodges one is open, the second opens his doors very soon.

Lama Hotel (2500 m): enough lodges are restored. While we were trekking in january, there was nobody. But for sure in the next weeks some lodges will open again. Do check in advance.

Gumnachowk / Riverside (2770 m): The two teashops are destroyed. One of them in an aftermath landslide in october 2015. Enormous rocks are broken from the cliff above.

Chunama (2800 m): the only lodge (Woodland) is restored and looks good (it was closed and will reopen during the season).

Ghoratabella (3030 m): destroyed by a landslide and impossible to reach via the old trail and in the upcoming years probably too dangerous. That’s why the trail is adjusted; after a small walk from Woodland lodge you cross the Langtang Khola over a new wooden bridge. Then you will walk about 2,5 km on the other side of the river. This part has plenty of possibilities for new lodges; it’s safe and there are enough flat places. This land is part of National Park Langtang… So the question is, if and who is allowed to build here and when the park will write out a tender.
Just before the destroyed (and now) empty Army Camp you cross the river again (wooden bridge) to rejoin the old trail.

Thyangsyap (3140): the lodges are destroyed, by a snow avalanche directly after the earthquake above Chyamki. Maybe the village will be rebuilt in the future. In this area not a single tree stand anymore. The air pressure of the avalanches (Langtang-village and above Chyamki) was so big that the trees fell down like they were small matches.

Chyamki (3230 m): The 6 lodges are gone, inclusive the suspension bridge. The massive snow avalanche and the air pressure have taken everything with it. There are no plans for rebuilding now, the same counts for the lodges and the bridge of Gompa, just before to the former village Langtang.

Langtang Village (3430 m): it’s hard to believe your own eyes if you know how beautiful this village has been here before. A few minutes after the earthquake an avalanche started high on the mountain giant Langtang Lirung (7228 m). This avalanche hit the glacier lake at 5000 metres height. The lake then flooded and came down: tons of ice, snow, rock and mud were spread in the valley over a length of about a kilometre. The power of the avalanche was about 50% of the atomic bomb that was thrown on Hiroshima after world war 2!
Nothing reminds you of the fact that there used to be a village here. It has become one big grey moraine and in the river you still find meters high ice. After this kilometre grey debris of moraine there is a part where everything has been blown away and pushed over by the air pressure. The only thing you see are little pieces of what used to be houses together with peoples belongings.
The old village that is situated a little higher is also destroyed, but here you still see some walls standing.
It’s still unclear if they will rebuild the village here in the near future.

Mundu (3550 m): the few houses of this old village are partly restored and the two lodges below are open. 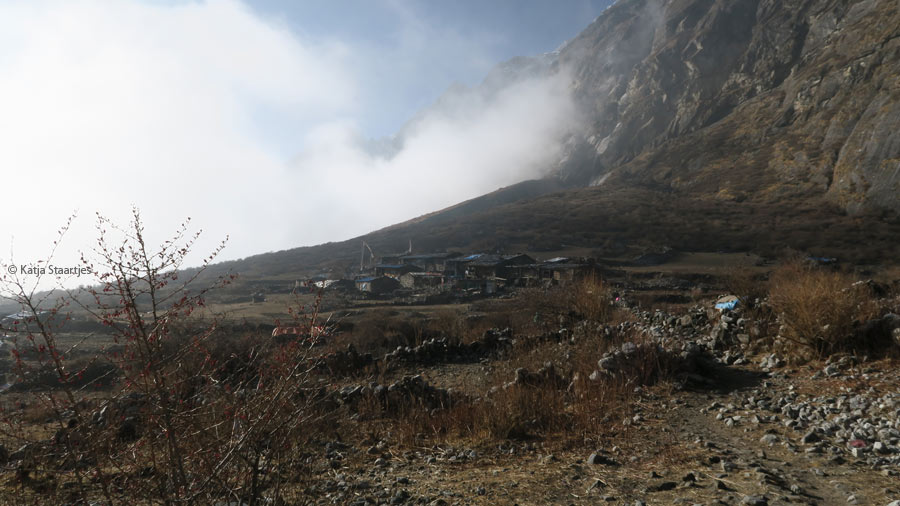 Kyangjin Gompa (3830 m): all lodges have quite some damage caused by a snow avalanche that came down directly after the earthquake from the Langtang Lirung Glacier. In january 2016 three out of the 25 lodges were reopened. This spring almost all the lodges will be open again and there will be plenty of choice to sleep. There is a lot of reconstruction going on in Kyangjin and every few days a helicopter brings construction materials.

Conclusion: if you don’t carry your own tent you have to walk the part Rimche (2400 m) → Mundu / Kyangjin in one go and you need to bring your own lunch. After this winter the lodges of Lama Hotel and Chunama (Woodland lodge, 2800 m) reopen. Then you can go Lama Hotel – Chunama–> Mundu.
It would be good if lodges will be build soon at the height of Ghoratabella, on the other side of the river. This is also a good height (3000 metres) to acclimatize if you’re not used to the height yet.

Advise to the Nepali Goverment: I spoke during my visit to Nepal with Deepak Raj Joshi (the CEO of the NTB), Tej Raj Dahal (Great Himalaya Trails) and Bachchu Shrestha (Ministry of Tourism) and my advise was: the government should remove debris of the houses around Langtang-village as soon as possible. It is practical and emotional impossible for the survivors to do this.
A beneficial side effect could be that the removal of debris creates jobs for porters.
Reconstruction of the area around Ghortabella needs to start as soon as possible, as now you need to trek from Lama Hotel directly to Mundu. This is for most trekkers quite long and there needs to be an extra possibility for acclimatising. Especially the areas where landslides occurred during the whole trek, need to be made safer.

I am very thankful that I could make this trek again. Even though there is a lot of misery I also found a lot of hope, especially when you see how the locals deal with the situation.
And the area is so beautiful, every time I fall in love again with Nepal and its people. The way to support the people of Nepal is by going to NepalNow! 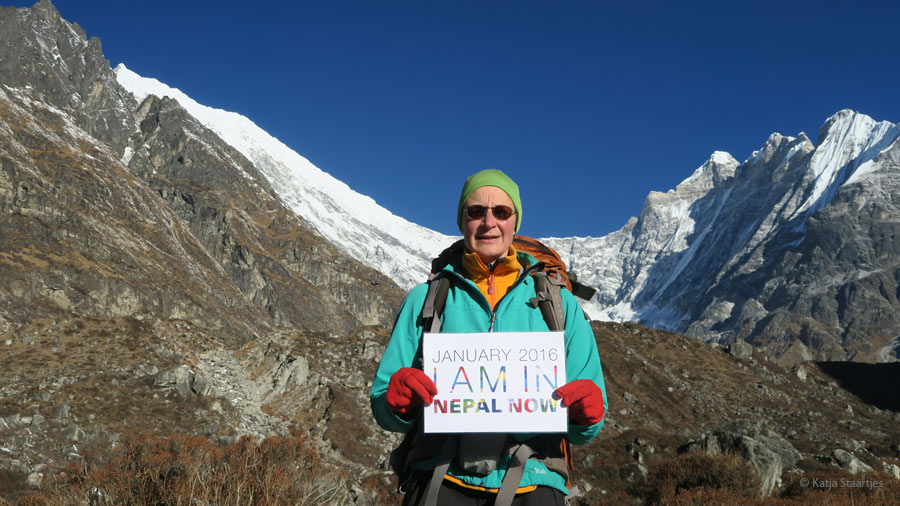