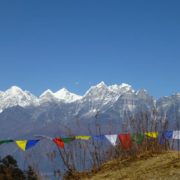 Last month, we (Katja Staartjes and Henk Wesselius) were 3 weeks in Nepal with the primary objective, to visit two reconstruction projects. In 2015 we were, with our Foundation Topaspiraties, active in Helambu and rebuilt a school in Kakani. In 2016 we were able to contribute financially to the reconstruction of a medical center and the construction of a water tap in the Solo area, south of Mount Everest. All this was coordinated by Chhiree Sherpa with whom we walked along the Great Himalaya Trail.

On December 14, we first attended the opening ceremony at the medical post in Khastap/Basa (just east of Phaplu). A true spectacle with singing, dancing and many speeches. More than 50 people a day since then can be helped medically in this new building, thanks to gifts from donors. Apart from the rebuilding we could support the additional post with a dental chair, an X-ray machine, an electric heater and a first aid rucksack.

After the grand opening of the medical center we visited the support project of the NKBV (Royal Dutch Climbing & Mountaineering Club), on the Dudh Kund trail. This tour is not really known, but is about 15 kilometers west of Lukla. The trail runs from Thaksindo north to the holy Dudh Kund lake at 4670 metres altitude. Every year in August full moon about 3,000 pilgrims visit this beautiful lake at the foot of the mountain giants Karyolung and Numbur. Further, the path in the summer is widely used by shepherds who flock to summer pastures with their yaks. Tourists come only slowly: around 500 per year, and they usually walk the path back and forth. A few crosses east to Phakding (on the regular Everest trail) in the Khumbu valley. Another option is from Dudh Kund to the west by trekking to the Numbur Circuit, what we have done. If you go to Dudh Kund, you need a tent … But what is the trip worthwhile! Amazing views of the Khumbu with massive inter alia, Everest, Lhotse, Thamserku, Kantega. And so pristine and quiet!

On this Dudh Kund trail the Royal Dutch Climbing and Mountaineering Club funded three new bridges and funded a water tap. The water point is 3500 meters at the campsite / Kharka Sarkaripati. The new concrete bridges are at 3900, 4000 and 4100 metres altitude respectively in a great mountain setting. Last summer and autumn the first pilgrims, locals and tourists have been able to use the water point and the new bridges.

Concerning our trip in Nepal in December 2016: after visiting Dudh Kund we crossed to the Numbur Circuit, a wild high route over 4,500 meters. Through the village Lacchewar and a primeval forest we went to Ngeju Kharka. Then we climbed up to the west by the pass Gyajo La (4880 m) through a stunning mountain scenery with the peaks Numbur and Sarmoche. A beautiful route, Himalayan pur sang! This area should be given more prominence: technically not difficult at all and very accessible from Phaplu and Shivalaya.

N.B. in Nepal is increasing mobile coverage! During our stay, I could regularly post updates by mobile on my personal facebook page.

At the Foundation’s website Topaspiraties  you can read more information about our reconstruction projects. With great thanks to all donors!